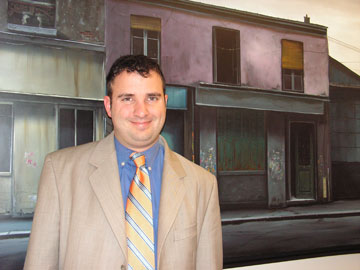 In 2007, 41 teens of different faiths traveled to Israel to participate in a program called Common Ground. They discovered what they had in common and discussed differences. The friendships they developed before traveling to Israel allowed participants to demonstrate that people can get along despite disagreements. The teens returned to Philadelphia as ambassadors of tolerance and acceptance. In 2010, members of the steering committee and Common Ground alumni convened to re- launch the program.

Evan Levitt graduated from Quinnipiac University in 1998 and launched his career path in Israel as an OTZMA Fellow. While living in Israel, he taught English and assisted in resettlement of new immigrants through the Jewish Agency for Israel. Levitt earned an MA from Gratz College and has worked for ten years in fundraising on behalf of the Jewish community. He lives with his wife Risa in South Philadelphia.