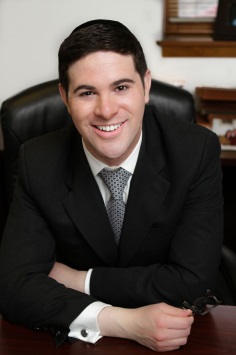 The Law Office of Steven Auerbach is a Philadelphia-based law firm that handles nearly all aspects of commercial, personal injury, and unemployment law. Steven Auerbach and his firm work tirelessly to ensure that you receive favorable results from your hearing. Auerbach’s newly-launched legal practice is tailored to meet the unique needs of litigants in the Philadelphia area, and has emerged as a recognized leader in commercial law and unemployment compensation litigation. Covered cases include: personal injury, commercial law, family law, on-the-job and traffic accidents, and unemployment compensation. Whether your case is settled out of court, in mediation, or in front of a judge appointed by law, Auerbach can help your case.

Steve is a Main Line attorney, father, and son. At 27, Steve has graduated from law school, opened his own commercial litigation practice, and has authored the World’s first English table of contents for the Shulchan Aruch (Code of Jewish Law). Steve is best characterized by his strong sense of determinism and appreciation of nuance. He is excited by trend-setters, ground-breakers, and by those who maximize their potential.