This post was originally published on #NoshGoals, a side project from our Engagement Associate, Rachel Abramowitz. See the original post here.

When you think about it, I really think Thanksgiving is basically a Jewish holiday. All we do is eat, gossip, fight over seating arrangements and complain about how full we are… and best part is there aren’t even any presents involved.

For me (because I’m oblivious to everything else in the room when there’s food on my plate), I didn’t even realize literally until I sat down to write this how Jew-y my thanksgiving even is. I guess I kinda just thought everyone had latkes and challah in their cornucopia. Also, I recently found out some people eat HAM at their thanksgiving meal. I mean, no offense to those of you who do this but like, WHAT?? Ham? Really?! I don’t keep kosher, nor have I ever kept kosher, but the thought of going out and spending money to buy an entire ham to eat as a main course for a meal somehow crosses some kashrut threshold for me… but I digress.

Here are some of my favorite turkey day recipes… without any ham involved.

Sweet!… Potato. Start by grating up a few sweet taters, add in one egg per two potatoes, scallions, salt and pepper. Form into patties. Fry ’em up real nice and crispy then top with sour cream and some cranberry jam/sauce. 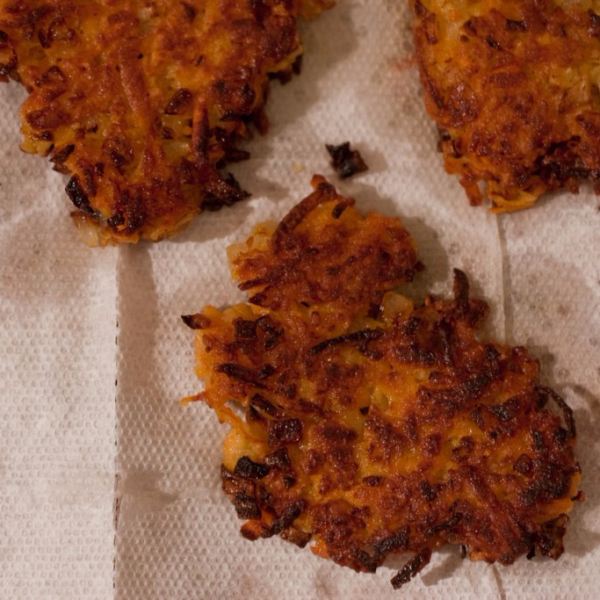 First, roast or fry some brussels (halved, with salt and pepper and a little olive oil if you decide to roast in the oven) till they’re crispy. While they cook, mix in a bowl soy sauce/fish sauce, maple syrup, sriracha, garlic, lime juice. You can do about even amounts of everything, although for me I like extra soy sauce and lime, while I go easy on the sriracha. So just go with your taste. Mix the cooked brussels sprouts with the sauce while they’re still hot and serve. These are so good and while not traditional thanksgiving, a nice zesty and parve addition to the table. 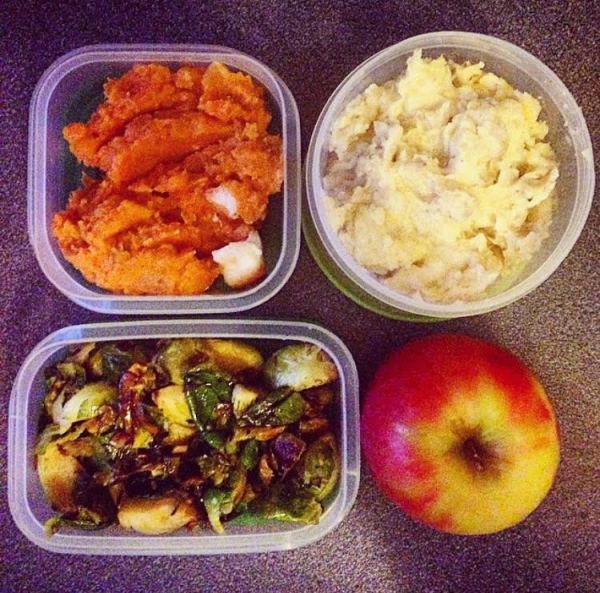 This right here is my favorite thing on the thanksgiving table, no doubt. You start by caramelizing 2 white onions with butter over medium heat in a skillet. Add a few chopped sage leaves, and mix with cubed cornbread (the ratios later work for about 4-5 large muffins worth of cornbread). Salt and pepper liberally. In a small bowl, mix 2 eggs, about a half a cup of cream (or other dairy type liquid… I’m sure you could also just double the stock if you don’t want dairy here) and about half a cup of stock (I use chicken stock but you can also use veggie stock). Mix this in gently with the cornbread and put back in the skillet. Bake at 375 until the stuffing is set and it’s crusty on top (about 30 mins). You can also add turkey sausage to the stuffing if you wanna get fancy with it. I usually add that turkey sausage they sell with apples in it, which I have to say adds a nice salty and sweetness to the stuffing.

Check here for lots of fall recipes… including this awesome salad! 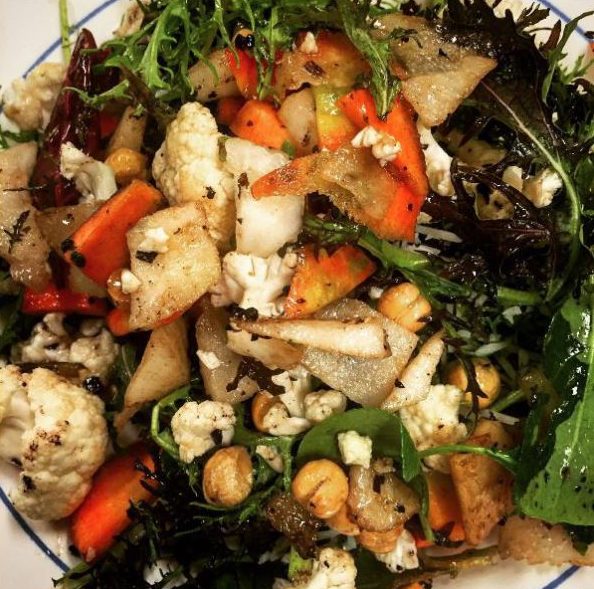 Happy Thanksgiving from Tribe 12 Team! Check out Thanksgiving-week events in Philly on gobejewish.com and this dinnertime discussion guide from Repair The World.