On Being a Scientist Who Believes in G-d

Paulina Koyfman is our new intern out of the University of the Sciences! Since she’s a microbiologist-to-be, we asked her to share her perspective on the relationship between science and religion.

Come May, I will have completed my degree in Microbiology. I will have finished four years of studying antibiotics, protein purification, genome annotation, the Big Bang, evolution and – the pillar of scientific discovery – the Scientific Method. Because of the Scientific Method, people can confidently ask me “How can you believe in G-d?” And because of it, I can confidently answer.

In the Scientific Method, you develop a hypothesis, test it with an experiment, and analyze the results. Above all else, though, you first have to ask a question. Growing up in a Jewish family is when I first learned the importance of asking a question and finding evidence that supports the answer.

At the dinner table on Passover, we crack open the Haggadah and sit through what feels like an eternity of ritual. Most importantly, we encourage children to ask questions and listen to the answers. Why eat matzo? Why eat bitter herbs? Why dip twice? Why recline?

So, I asked questions about my religion and searched for answers.

The backbone to my belief system is that scripture should not be taken in the most literal form. The Torah was written in ways that defy logic on a multitude of levels. This ranges from the clear exaggeration of the timeline of Creation to a flood that destroyed the world in 40 days. And consequently, religious texts need to be subject to questions and answered with reason (read: science).

The story of Creation in the book of Genesis condenses the millions of years of evolution into 7 days. Each event had not happened in a day. Rather, this series of precise, complicated evolutionary events was abridged into a more easily comprehended short story. This short story can now be explained with more reason and logic, like scientific evidence. Likewise, in the book of Genesis was the Great Flood that lasted 40 days and nights to return the Earth to the state that it was at before it was ruined by the human race. Though there has not been evidence to suggest an ecological event on this massive scale, I would imagine that the risk of losing California to the rising waters of the Pacific Ocean was already forewarned by the Torah.

The common chicken-or-the-egg question to ask is “if G-d created the universe, who created G-d?” To this, the most common answer is “if before the Big Bang there was nothing, what sparked the Big Bang?” These are the wrong questions to ask, as they are creating a false dilemma where one person has to be wrong. I believe that there could be an answer that can prove us both right.

G-d is neither male or female. He is eternal. He is omnipotent, omniscient, incorporeal. He is one. G-d is the creator of everything, so therefore He created G-d. He created Time, yet does not go by the laws of Time. 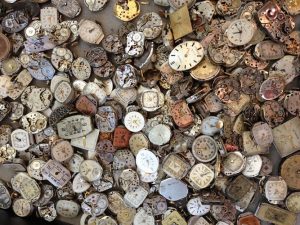 (A fun way to break your brain is to ask yourself: What is Time?)

Instead of asking if G-d or the Big Bang created the universe, we should be considering if they are the same thing. I argue G-d is the Big Bang. He is gravity. He is energy. And He is entropy.

An important part of my Judaism is that G-d does not have to be interpreted as a man in the sky with big muscles and a white beard. He is here, there, everywhere. He is nowhere. He is not a He, but He is also not a She. He is not a They. He is something that the human mind can’t comprehend. But we can’t – shouldn’t – stop ourselves from trying to comprehend Him anyway.

As a Jew, I have to ask questions and find the answers that make the world a better place. And as a scientist, I am proud to say that I believe in G-d. And I don’t have to sacrifice one amazing side of me in order to be the other amazing one.

If you are interested in debating about G-d, meet Paulina at our Story Slam at Writer’s Block Rehab!